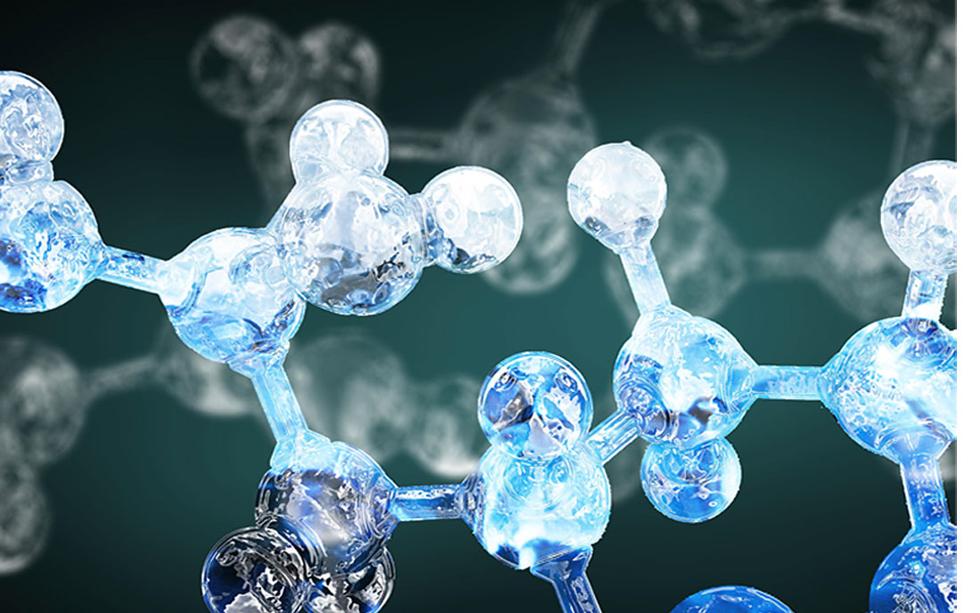 Created with the collaboration of Dr. Marchetti, D.: freelancer in Statistics

Obesity was a rare situation before the twentieth century, but now obesity and pandemic have become almost synonymous, and Italian data reflect this sad forecast of epidemiological data. In Italy 35% of the population is overweight and 10% obese [3]. The World Health Organization (WHO) has officially recognized obesity as a global epidemic. [1]

In 2005, the WHO estimated that at least 400 million adults (9.8%) were obese, with higher rates among women than men [2]. According to the seventh report of the Institute Auxologico of Milan (Italy) on the obesity issue, announced last year, for those between the age of 45 and 64, only one out of three men has a normal weight, while, for women, the ratio is one to one. 36% of children, by the age of eight (the peak age), are overweight or obese. Obesity is increasing of 2.5% every 5 years [3].

The purpose is to evaluate a practical and fast way to weight loss and health improvement that uses only the biochemical properties of food, without giving any indications on the amount, in other words on calories. The method used is the Bioimis Nutritional Program.

The sample studied has followed a nutrition without limits in the quantity of food and extra virgin olive oil as specified by the Bioimis Nutritional Program. Each person received a menu made of breakfast, lunch and dinner to follow for 2 consecutive days, the second day the person would have called and been provided with the next menu for the following 2 days.

For the following analysis all customers were considered, regardless of the number of months they took part in Ideal Fit Plan.

The table below shows the frequencies of customers for the number of months of Ideal Fit:

Within the sample used for analysis, there are individuals with certain medical conditions such as diabetes, hypertension and thyroid disease.

Specifically, about 7% of the sample is diabetic, 3% have impaired thyroid function and 22% is hypertensive.

Considering the type of variables to be analyzed (quantitative), and having as objective the comparison of some values in two different times (at the beginning and end of treatment), the best suitable statistical tool for this type of analysis is the t test with paired data [1]. This test compares the average score of the two groups, and allows to understand if the difference between the two averages is due to chance (linked to the current sample) or it is statistically significant (meaning it is real, of important relevance and extensible to the entire population).

Before applying the t test, it is necessary to evaluate the equality of  the two group variances in question (in this case the group of subjects is unique, and taken at two different times). The performance of this assessment is carried out by the test statistic relationship between the variances [2]. Therefore, before each t test the test on the variances will be reported (which will not be commented because of no conceptual relevance for this study, being it only instrumental).

The average initial weight is 91 kg, with a minimum value of 41kg and a maximum value of 217Kg. After treatment, the values tend to be lower: the average weight of 7kg decreases and becomes equal to 84Kg, the minimum value becomes 44Kg, and the maximum is 186Kg.

From the average values obtained, by dividing the sample into two groups based on gender, males seem to have a greater weight decrease due to the treatment (average value 9 kg difference) than women (7kg difference).

By analyzing the equality of averages, it will be shown if these differences are related to the randomness of the sample used, or if they can relate to the whole population.

The t test is significant in all comparisons, this means that the "before" average weight are significantly different from the "after" treatment averages, with a p-value less than 0.0001.

In addition to the tests reported in the chart, t one-sided test was used to help understand the direction of the inequality (meaning,  which of the two averages is greater). Regarding the weight, the one-sided test shows a p-value less than 0.0001 in favour of weight loss: the "after" weight is on average less than the  "before" weight, both in the general sample and in the male and female samples.
On average, weight loss for the overall sample is 10.7kg, the customer with the most weight loss registers a weight of 39kg, while the customer with the lowest result gained 2kg.
For the female group, the average weight loss is 9.9kg, with a maximum loss of 24.0Kg (the minimum loss was -2kg, i.e. an increase in weight).

An Analysis of variance (ANOVA), between the two genders,  was performed to study the weight loss occurred during the Ideal Fit month.

The result agrees with what stated in the previous steps: the two groups are significantly different (F = 111.16 test with p.value <0.001). This means that the customer's gender affects the amount of Kg they manage to lose. 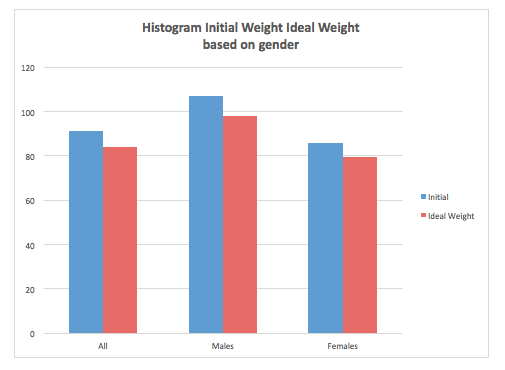 The results of the t test for BMI are similar to the results obtained for the average weight (BMI is in fact a transformation of weight): t test is significant for all the samples, meaning that the initial BMI is significantly different from the ideal one.

Considering the one-sided hypothesis we understand that, specifically, the ideal cholesterol is on average lower than the initial cholesterol (p-value of <0.01).

Considering only the group of males, the difference remains evident: total cholesterol is different from the ideal initial cholesterol, in particular is greater than the initial one (alternative hypotheses with p-value <0.001).

For the overall sample and the female group, the average score of "before" - "after" HDL are statistically very significant, while less significant (p-value equal to 0.03) in the male group.

Considering the one-sided hypothesis, the results show a decrease in HDL score between the time before and the time after treatment (p-value <0.001 for females and overall champion, for males p-value equal to 0.01). Therefore, the after scores are lower than the baseline scores. 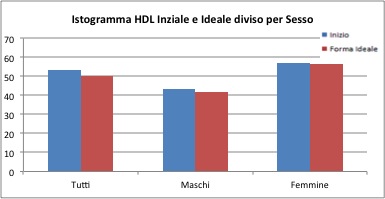 Even the test confirms the equality of the averages in the "before" and "after" treatment sample. Small differences recorded are not significant, and are simply related to the sample "chosen". 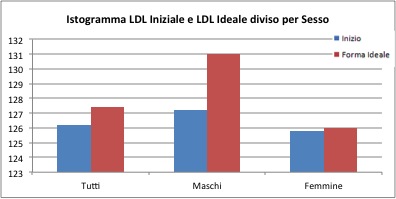 Although the differences are small, the t test confirms a real difference between the "before" group and the "after" group from the treatment (both for the general case, the males group and females group).

Specifically, initial Hbglic scores can be considered more at the beginning of treatment (p-value less than 0.001 one-sided hypothesis).

The TGD average for the general sample is equal to 134 mg / dL before treatment and drops to 97 mg / dl after the treatment. For males only, the initial value is 179 points, and at the end of treatment is 117. For females only, the initial average is 116 mg / dl, and at treament concluded is 90.2 mg / dl.
The male group presents a maximum value of 930 points, a very high value for triglycerides. In fact, one of the customers reported this value. We should take into account, for a more detailed analysis, the possibility of eliminating such data due to its uniqueness and uncommonness. However, for the analysis in question it was considered.

All the samples indicate that the initial average is significantly different from the end of treatment average. Thanks to the one-sided test (p-value <0.0001) the average values recorded at the end of treatment are lower than the initial average values. Specifically, for the overall sample average it is recorded a decrease of 37 points, for males only the decrease amounted 63, for females only amounts to 26 points.

Thanks to the t test, it will be possible to tell if the difference is significant, or  can be considered random (that is tied to specific sample).

As seen from the p-values reported in the table (all greater than 0.05) the difference between the nitrogen of the "before" and those of "after" does not result significant. Not even the unilateral hypothesis reported significant results.

Therefore, this value does not report a difference between the "before-after" values.

As you could guess from the above table, the sample does not appear to present a general difference between the before and after treatment averages (p-value 0.23). This is found also in the only females sample (p-value 0.26). However, for the group of males there is a significant difference, but this is probably due to the extreme values achieved in this group for both the initial creatinine (91) and the ideal one (62.8). Even in this case is to assess the possibility of not considering these values. 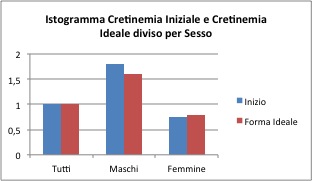 In conclusion it can be stated that the treatment produces effects on most of the values considered.
Therefore, to summarize the results we obtain:

As mentioned before, the Bioimis Nutritional Program is structured in two Programs. The first program involves an "unconventional" diet that focuses its attention on the biochemical action of foods to maximize weight loss. The intent of this first observation was to check the body's response to this kind of diet to exclude health issues to customers, giving particular attention to renal function, element considered "at risk" in diets with protein content higher than that one indicated by the Mediterranean diet. The results in this regard are considered satisfactory.

Currently, there is an ongoing monitoring of these customers that will provide us with blood tests results performed after three months from the Keep Fit stage and at the end of the first year from the beginning of the program.

Caballero, «The Global Epidemic of Obesity».;

«WHO | Obesity and overweight».

Walser M. Effects of protein intake on renal function and on the development of renal disease. In: The Role of Protein and Amino Acids in Sustaining and Enhancing Performance. Committee on Military Nutrition Research, Institute of Medicine. Washington, DC: National Academies Press, 1999, pp. 137-154.

Lew SW, Bosch JP. Effect of diet on creatinine clearance and excretion in young and elderly healthy subjects and in patients with renal disease. J Am Soc Nephrol 1991;2:856–65.