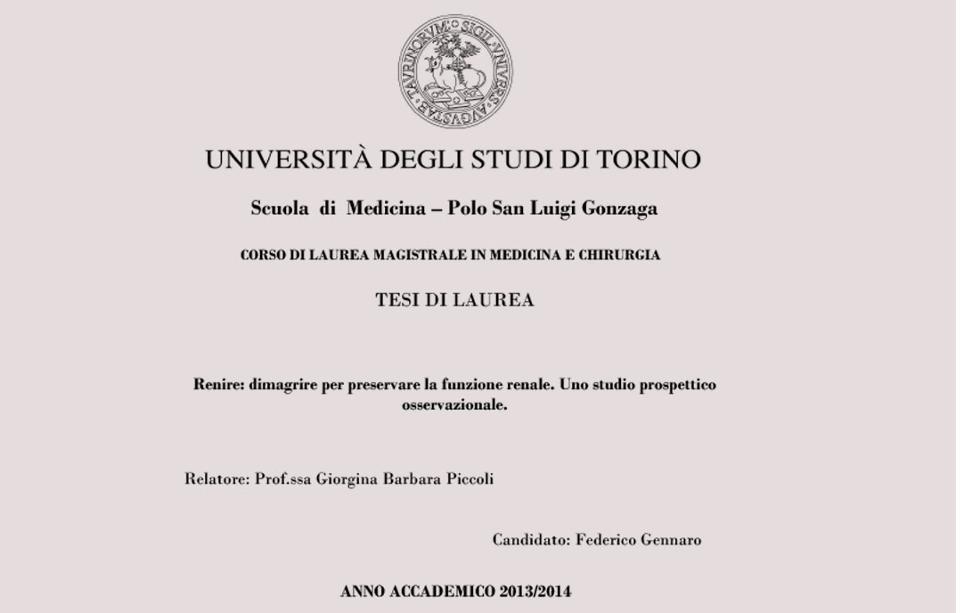 The Bioimis Nutritional Program has been the subject of numerous studies over the past few years and most recently the slimming course has been considered for a study which involved Dr. Federico Gennaro, majoring in Medicine and Surgery at the University of Turin, during his thesis work.

His thesis illustrates the results obtained in the study called "Renire", made at the Struttura Semplice of Nephrology AOU San Luigi Gonzaga Orbassano (TO), on a series of patients with chronic kidney disease, of diverse pathogenesis and gravity, and given the opportunity to follow a traditional approach or a personalized intensive and “coach-assisted" weight loss program.

At the end of follow-up, all patients lost weight (7.6 to 20 kg), although in different time intervals. Within the group with coach-assisted qualitative diet, all patients lost a substantial amount of weight concentrated mainly in the first diet period, in line with the phase of "rapid weight loss". Similar results were obtained in non-renal disease (healthy) individuals, in which weight loss was even more pronounced. As for the "other diets" group, weight loss was less impressive.

In terms of "overweight loss" (relative to a target of BMI <25 kg/m2), 21/24 patients of the group with coach-assisted diet lost more than 30% of their overweight, 6/17 patients in the group with "traditional" or "self-made" diets and 30/38 in the (healthy) control group.

As for the data of renal function (creatinine, GFR, proteinuria 24h), main blood chemistry data (albumin, HCO3-, uric acid) and anthropometric data (weight, BMI, OH, LTI, FTI, handgrip) there are no significant differences between the group with ad libitum diets and the group with traditional "dietary approach". The two groups (Bioimis and other diets), therefore, while being characterized by considerable heterogeneity and having been freely assorted in different eating patterns, do not exhibit basic differences.

Perhaps, the most important datum in this context is the fact that weight loss (assessed using Body Composition Serial measurements) in both groups was not accompanied by loss of lean mass, but rather by its significant improvement at the expense of the fat mass, in significant reduction. Additionally, the comparison of paired data related to the hand grip measurements confirm these values: results show no loss of strength, but rather an improvement in performance, which becomes significant at the intervals of five months to twelve months for "Bioimis" patients and baseline group and five months for patients in the group with traditional diets, another sign of good muscle mass preservation.

The bioelectrical impedance assessment, available only at the end of the followup period, revealed that no patient presented pathological values ​​of lean body mass compared to the normal population of reference: the average value of lean body mass was 57.4% of the entire body mass (44.2% min - max 75.9%).

In detail, in the group with coach-assisted diet, compared to a median value of lean mass baseline of 13.3 kg/m2, with time interval of 12 months this appears substantially unchanged, while the decrease of fat mass is definitely marked.